Yesterday we took possession of our 1 BBL pilot brewery. Without any further ado (and with Viola for size comparison): 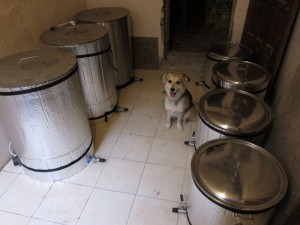 It’s not a big plant, at 165 litres per batch, but the journey of a thousand miles begins with a single step.

We’re still working on suppliers, council paperwork, and waiting for some finishing on the space. But we’re on track to start selling in August. Perfect for the Olympics hangover.

Now to brew some BETA beer in the garden.

Brewing Resources (and a hint at EXCELLENT news)

Although I’m young in my brewing experience, I’m old enough to know that many, many people are much more experienced than I am. I’m making good beer, mind you, but there’s always someone who knows more than I do.

So, for those that like to brew, here are some resources I highly recommend:

I’m sure there are more resources out there. What do you use to brew and judge beer?

PS – Big news next week. I’ll give you a hint: it’s shiny, and it should be delivered to the site before any Sabbath is properly underway. We are also working on getting our first BETA Tasting event. And there’s a brewday on the horizon: any suggestions? So much to do!

Brewlab Start Up Brewing Course is Full of Awesome

I spent last week up in Sunderland at Brewlab doing the start up brewing three day course, with an additional practical day at the High House Farm Brewery. The sun woke me up before five every morning, and the nights wore on… a bit. But somehow each morning was better and better; exhaustion blunted by enthusiasm is empowering.

Twenty-something students attended the three day course, with variable levels of brewing and business experience. We had new brewery owners, a beer blogger of some repute, a pub landlord, avid homebrewers, and a couple of troublemakers (the Superfriends were definitely in that category). Ten of us went on to attend the practical day.

Here’s how it went, to the best of my memory:

Day One: The Brewing Process
Discussion of ingredients, scientific methods, cleaning, sterility, recipe formulation, and equipment. A great round up for anyone, and especially useful for those that didn’t have a homebrewing background. A number of us finished the day at the Isis in Sunderland, which had a good selection of real ale, but not a very good keg beer selection. Dinner was courtesy of Weatherspoons (there are a lot of them in Sunderland, and not much else). It was about what you would expect.

Day Two: Business Development, Beer Duty, Brewery Design,  and Marketing
Some realities on the business, the intricacies of HMRC’s death grasp on the beer industry, engineering equipment to accomplish what we talked about on day one, and thoughts on how to differentiate new products in what is already a very crowded market. All good exercises, and I am thankful that Hoppy Collie is not trying to make its trade on the back of best bitter. After the course we made our way to Newcastle, accidentally crashing a private party at the Waterline, moving onto an excellent meal and selection of beer at the Broad Chare, and finishing the night at Brewdog Newcastle, where we met Stephen, who had been brewing all night. We were, as they say, instant friends.

Day Three: Brewery Tours, Tasting, and Microbiology
We started the day by visiting three breweries: Ouseburn Valley Brewery, Wylam Brewery, and Big Lamp Brewery. Ouseburn Valley operates in a pub basement on a 5 BBL kit, Wylam on a farm with 20 BBL, and Big Lamp in a former water pumping station with 10 BBL. Each had lessons to learn, and lunch at Big Lamp’s brewery tap was welcomed, as were their excellent bitter and brown ale. We returned to Brewlab in the afternoon for an excellent session on the smells, and tastes of beer (and especially flaws). After the school-day, we ventured forth once more to Newcastle, stopping for a pint at the Union Rooms, dinner at Dabbawal, and the inevitable (and enjoyable) round or two at Brewdog Newcastle, where the lovely Helen charmed us and made with the gifties.

Day Four: Brewday at the High House Farm Brewery
Ten-ish of us stayed on for a fourth day going through the brewing process at High House Farm Brewery. If I have any complaint about the course, it’s that we didn’t really do any hands-on brewing, and while the fourth day was useful to let ideas jell, we really just hung around the brewery and asked questions as Michael, the head brewer, made a 10 BBL batch of Matfen Magic. I think we would have been better off running a full brew on the Brewlab 3.5 BBL than going on to High House, but perhaps the course would be better served by doing both. The last remnants of the party broke up, and when the superfriends returned to Sunderland, it was all we could do to eat some Chinese food at Shanghai Manor (pretty good, as it turns out), and a pint at Fitzgerald’s (busy, but frankly vastly overpriced by local standards).

Accommodation throughout for myself and a few others was at the Mowbray Guesthouse. Allison her family were great, and their puppy is absolutely lovely. I will happily stay there the next time I’m in Sunderland.

All I can say is, if you are thinking about opening a brewery, go to Brewlab. It’s the best training money I ever spent, and it all came straight out of my pocket. I cannot thank the Brewlab folk (Arthur, Richard, Dr. Keith, Piero, Mike, and Allison, in order of appearance) enough in helping me to reignite my passion for brewing.

Watch this space. There is big news coming.